As a bisexual trans guy, I use all the apps and dating sites when looking for a potential mate. Most of these sites are filled with cisgender (non trans people) who don’t know much about trans men. I think people get nervous when they don’t feel secure in understanding how to date someone. Personally, I don’t think folks should over think it. Over thinking leads to some repetitive question asking that trans guys are tired of hearing when dating. Here’s a few things to avoid when perusing a trans man.

This is a very common and avoidable question I receive a lot when on dating sites. I usually respond by asking, “How about you? How long have you been a man or woman?” Guys, did you start counting from the day you grew facial hair? Did I become a man when I changed my name? My first shot of testosterone? Top surgery? Bottom surgery? For me, I’ve been a man since I was born because as soon as I could speak, I was identifying as a boy. My body might’ve said otherwise but I’ve always been a man. At any rate, I’m a man and you’re looking to date men so that’s what counts!

2. Wow! I could never tell you were trans! Good job!

Sometimes people will hit me up on dating apps and congratulate me on “looking like a regular guy.” Folks, my gender isn’t a costume or a prank and I’m not trying to win an award. I am just trying to feel comfortable in my body. If I “pass” well that has very little to do with me, honestly. Surgery and hormones work differently for everyone and every trans person makes different choices surrounding a medical transition. Personally, I don’t think we should celebrate people on how well they pass as their true gender; it’s how they identify that matters.

3. I have dated women before, so I am totally cool with you being trans.

I understand feeling a need to reassure a potential trans male date that you accept them, but it can be done a little differently. By saying this, you’re insinuating that I am a woman or at the very least more female than male. Dating or having sex with a trans man means you’re with a man. You can be cool with me being trans just because you’re not trans exclusive there are no other pre requisites.

Everyone now and then someone will contact me on a dating app to tell me I am not a “real” man because I don’t have male chromosome. Do you check the DNA of all your dates? Did you know some biological (cisgender) females are actually born with male chromosomes and vice versa? Intersex people also exist. Chromosomes aren’t proof of ones gender. Lastly, there’s rarely ever a time or place for this debate but it’s unacceptable to bring this up to a random stranger on the internet who is trying to find love or a hook up. I am not going to de-transition or listen to you, so don’t waste your breathe. While you’re at it, maybe investigate why my gender bothers you so much? Let us live our lives.

This one makes me laugh! Mainstream media has focused on trans women much more than trans men. Many people don’t know we exist. Apparently, lots of people assume all trans people transition to women. So, when some folks learn that I’m trans, their minds jump to visions of me secretly longing for breasts and wearing women’s clothes with a beard. The look on their faces when I say, “No, I transitioned to male,” is pretty gratifying.

You may feel this way but remember trans people are far more than their body parts. Some trans men might like this language used for them and take it as a compliment while others wouldn’t. Don’t forget many trans men, like myself, got bottom surgery. Don’t make assumptions and try to fetishize us less, please. Get to know a trans person and find out what language like they to have used for their body parts.

Are you sure about that? We’re everywhere.

I want to have fun! My aim on dating sites is to have awesome dates and enjoy sex. I’m not teaching anyone how to have sex with me. I don’t prefer feeling like an experiment in the sheets. There is plenty of information online about pleasing all sorts of people and sets of genitals. If you’re interested in a trans guy, read up!

Basil is a southern man of transgender experience, writer, photographer, and the Executive Director of Transilient. He’s an astrology enthusiast and he grew up in rural South Carolina and was homeless queer youth at the age of 16. He cites his childhood as being a large motivator in his work. He’s been published numerous times with various outlets such as Harper’s Bazar, OUT, Buzzfeed, Refinery 29, and more. He got a BA in Creative Writing from the New School. www.basilvaughnsoper.com 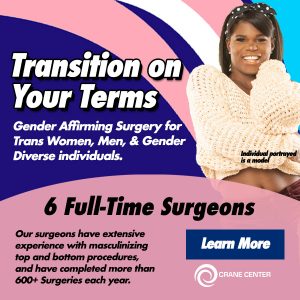