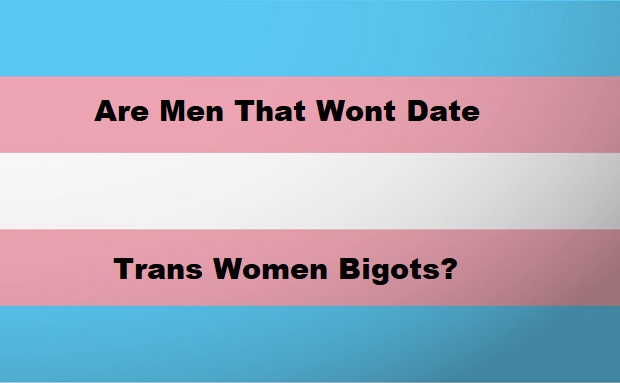 This question was posed recently in our community recently for other members to chime in. It is a hot topic recently thanks in part to a study done earlier this year where 88% of the respondents, almost all who were cis, stated that they would not be willing to date a trans person. Here are some of the answers that our members provided.

Trans Women Thoughts On The Topic

• “A large enough percentage of transwomen are thought to retain enough masculine traits either in attitude or visual clues for most straight men to not consider dating from this pool as a whole. Rightly or wrongly, these men would assume they’d be wasting time looking in this particular direction. In my honest opinion they’d be mistaken – but ‘bigot’ is far too strong a word to describe such an attitude. Bigots judge others, not themselves. It’s possible for a man to accept that some women are incredibly intelligent, for example: yet still consider having too many brains to be a personal turn off. I’d call these men unimaginative or ill informed.”

• “It’s just a preference and absurd to think it’s bigoted. ”

• “The male desire for a cis-woman versus a trans-woman is based on things he is both conscious and unconscious of. It can be a biological matter, not just fun and anticipation of sex. An atypical man could find 9,999 cis-women to be unimportant or repulsive before he finds one who he cannot resist trying to win, based on hormonal attraction alone. Much of that is based in scent and visual cues in addition to intelligence and social fit. Sexual attraction often renders some men unable to use their brains. So what if a man happens to want a woman with ovaries and a womb? That’s his choice. Be all the happier when the right person seriously wants you. Desire is a bunch of crap anyway. If anything is romantic then it’s about building something real, one slow step at a time.”

• “Different strokes for different folks. Everyone is entitled to their thoughts and opinions. There are some genuine people whom cannot contemplate anything different to what they were raised with. It’s not their fault. I would not call that person a bigot. Bigotry to me is when someone is fully informed and has developed a good knowledge of the subject matter, but still says No that is not my way, and the only way is mine, everyone else is wrong. Stubbornness is not necessarily bigotry.”

• “I don’t necessarily agree with that they are bigots. I think as long as people respect each other’s basic human rights, they are entitled to be as open minded or close minded about whom they date.”

• “As long as a dude sticks to ‘ain’t my thing’ then no, it’s not describable bigotry or discrimination. However, if he expounds on the reasons why he wouldn’t consider dating transwomen and those reasons are discriminatory, then he’s discriminatory. I don’t think dudes should be called bigots on the simple basis that they prefer not to date certain types of women as long as it’s that simple.”

• “I don’t think it’s them being bigoted. I consider it in the same vein of only dating someone of your own race or religion. For some people, it’s just the fact that those are the people you’ve known, have been exposed to, etc. In cases of religion, some are specific on dating someone from that religion.”

Conclusion
All of the responders essentially agreed that men that don’t choose to date trans women are bigots. You may be surprised by that since all of our members are either trans or are attracted to people that are trans. Some trans women obviously feel they are missing out by not dating trans women and they are right.

Join Transgender Date now and you can participate in this topic or many other like it. We are much more than just a dating site. We are a community.