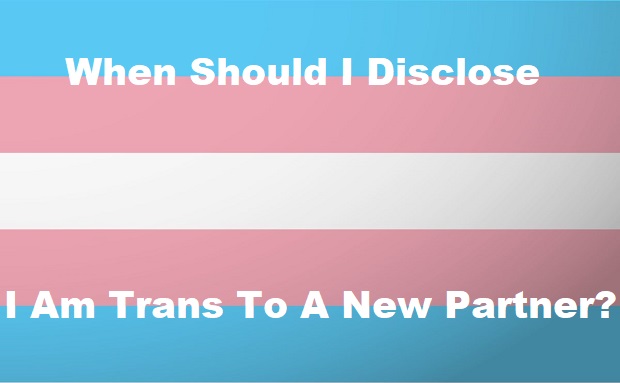 When to tell a potential partner that you are trans has been a hot button topic for a long time. The debate has been reignited in the mainstream media this year in numerous articles usually from a single person’s point of view. There are many different opinions that usually vary wildly depending on who is answering the question. The question was posed to members of the Transgender Date community so we are sharing some of their answers.

• “I think that it is best to be up front. Like first meeting. I know rejection is tough. Especially if I feel attracted and he seems interested. Yet I think the longer the desire builds the more negative the reaction in a man who may harbor fear especially transphobia, plus rigid gender ideas. There is still that wide perception that we are hiding something! I even had a friend get mad at me for a time during my social transition. I had been friends for years yet her response was “why were you hiding something!” That’s a different topic but many think we are somehow deliberately cloaking ourselves. (We are when it comes to danger.) We are expressing ourselves as women–who we were from the beginning. I truly hope you find someone who will love you. I think most of us need to take the friends first approach especially with straight men.”

• “I think it is dependent on multiple things such as a woman’s ability to pass, her intention to bed him on a first date etc..
I for one have never told a man that I am trans just because we are going on a date and I am not about to start now just because its now considered the right thing to do. I don’t owe any man my painful past!”

• “You should always be upfront, especially if you’re pre/non op. You might think once he gets to know you he’ll be fine with it no matter what, but that’s absolutely not the case. If he’s not into trans, he’ll shut you down regardless and if he’s a bit of a dick he might lash out or say something hurtful. I’ve had experience with ostensibly “nice guys” who showed their true colors once they found out – as if a switch in their heads went off. Don’t play this game, it’s not worth it.”

• “I always go back to what my first boyfriend told me that is if he had found out in the beginning he would have shut me down he said because he got to know me he fell in love with me, So I say hold off and tell him after he gets to know you.”

• “I like to feel the guys out first and see what their level of tolerance is like – and, of course, I’d never reveal my trans-status without being surrounded by people.”

• “ALWAYS tell them upfront. Screw that “waiting until they get to know you” crap. First off its extremely irresponsible , dangerous and deceptive to do that. A vast majority of society already discredits transgender women because they think we are out to deceive or “trick” straight guys into dating us. Which is just asinine. You don’t wanna add to that stereotype.”

• “Always say it upfront. I only waited to tell a guy I was dating once and that gave us a chance to be a couple even though he told me if I would’ve told him the first day we talked he would not have given me a chance. Needless to say it did not last long because even though he liked me he did not like my transness , breaking my heart. So in my opinion always be upfront because if he won’t accept you for what you are then he doesn’t deserve to be with you in the first place.”

• “Tell them upfront right away. You don’t know this man. You don’t know his history , his upraising or his temper. Hell he could kill you or beat you up. As soon as a man asks me in person I tell him right away. I say I’m sorry but I am TS and most of the time he will say “well you are very beautiful” and walk off. Not everyone is into trans girls and that is ok, but you never know who is really asking. He could be crazy.”

• “I refuse to put myself in danger anymore. After 40 years down as a single T woman trying to find love among the straight dating pool my advice is this… Dating is nerve racking as it is. No man is worth ending my life for.”

• “Any time before sex becomes an option, but as early as possible. There’s always a risk a guy may take the information the wrong way and act out, but the more dates you go on without being upfront, the higher the chance they may retaliate once you do say something. It’s better to turn a dude off right away then have guys feeling like they’ve pointlessly invested a lot of time in you. They shouldn’t even be looking at it that way, but some will regardless.”

• “Soon, certainly before a first date.”

There is consensus amongst our cis male members that responded that you tell the person upfront. A majority, but not all of our trans women agree with this as well. The women mostly believe that while it may not be the best way to ensure the potential relationship, it is the safest way. That until trans violence is no longer prevalent it is better to be safe than sorry.

We would love to know what you think. Join Transgender Date now and you can participate in this topic or many other like it. We are much more than just a dating site. We are a community.